We’re about halfway through the 21-day phenomenon known as March Madness. Back when this all started in 1939, college basketball fans streamed quickly through an 8-team bracket to the final game where Oregon defeated Ohio State 46-33 for the national championship.

In 2017, the key elements that make March Madness special are streaming video and social media.

Kevin Cesarz, Senior Director of Social Strategy for Thread, spoke with the WTOL Toledo news team on Wednesday about social media trends and tips for this year’s tournament. 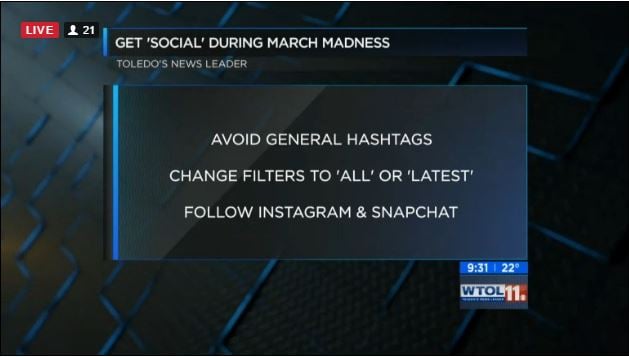 During last year’s tournament, more than 80.7 million live videos were streamed, totaling 17.8 million hours, through NCAA March Madness Live. Every single game in the tournament is available for streaming on your devices. It’s very common for viewers to stream video of the games to a big screen, watch other streams via computer, look up tournament information on a laptop … AND, monitor social media on their mobile.

Add 56 Million Facebook and Twitter Impressions during the 2016 NCAA National Championship (87% of Facebook posts were shared on mobile) and you have a pretty good idea of how people are watching, gathering info and expressing opinions on college hoops.

What team won the social media tournament in 2016? Well, the top teams in college basketball last season were Duke, Kentucky, Kansas and Villanova. Duke, for example, had 1.19 Million Twitter followers, 728,000 Facebook Followers and 547,000 followers on Instagram.

Here are a few other things you probably didn’t know about social media and March Madness:

Up Your Social Media Game

Posting a relevant, thought provoking comment or item during a live news or sports event can be a very successful brand strategy. Does an individual or brand’s idea or image add value to the event? Twitter, in their top examples of Live Tweets, show conspiracy theories, adult content and app sales. What do these non-relevant Tweets have in common? The omnipresent #MarchMadness hashtag. So how do you improve your social media experience to match your awesome steamed view of the tournament? 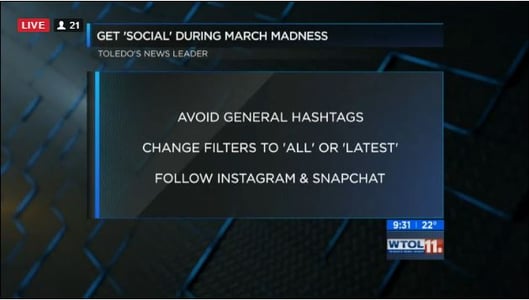