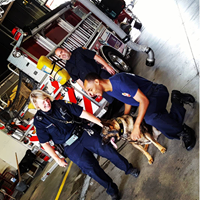 You can't miss that it was election day on November 8.  It is always a big day here at Thread  because we have the privilege of working with ballot issues and candidates who help make our communities better places to live and work.  This election day our team worked on five successful ballot issues.  They included:

The renewal of the City of Toledo's 3/4% income tax, which was set to expire at the end of the year.  The passage allows Toledo to keep its momentum moving forward.  It also protects the city's fire and police services from serious cuts that would have resulted in over 400 fewer safety forces, closure of about half of the city's fire stations and elimination of the detective bureau, among others.  The tax passed with 62% of the vote after a similar issue failed in March with only 38% of the vote.

Lucas County Children Services (LCCS) also passed a levy with Thread's counsel after its previous levy failed.  This levy included a renewal and a new money request, which was needed partly to provide services to children who are victimized by the heroin and opiate crisis.  The levy passed with 61.8% of the vote and will allow LCCS to continue to serve this growing community need.

Thread also worked with the re-election campaign of County Commissioner Pete Gerken, who was facing his most serious challenge in 12 years.  Thread provided the media and message support for a campaign that included dozens of committed volunteers.  We were able to remind voters of Pete's track record of standing up for the interests of working people.  His message hit home in Lucas County, where he won with 57% of the vote.

We also provided strategic planning and counsel to two levies in Hancock County:  50 North, the senior services program, and the Hancock County Alcohol, Drug Addiction, and Mental Health Services Board (ADAMHS).  Thread helped 50 North develop a new name and identity last year and was happy to help them win 61% of the vote for a renewal and new money issue in 2016 .  This success will allow 50 North to continue to serve the skyrocketing demand for its services in Hancock County.  The Hancock ADAMHS vote was for a replacement levy and won 67% of the vote.  This money will allow the Board to continue to provide vital mental health and recovery services.

We are proud to have worked with each of these groups and contributed to their success.  Their community contribution is a reward for us all.

Many people reading this might not ever have an issue on an election ballot.  What these results show is that Thread understands how to effectively communicate difficult ideas to the community...and there are a lot of clients and potential clients who find themselves in that position.  If you're one of them, reach out.  We'd love to discuss it with you.