As the mother of a 15-year-old boy, I've heard "OK Boomer!" way more times than probably necessary.  I have to admit, the first time I heard it, I reacted negatively and loudly announced "I'm not a Boomer!"  (I'm close. But technically, no, I'm not a boomer.)  This reaction of course delighted my son and now it is his mantra every time he talks about something I don't understand or every time I talk about something he doesn't understand.

A recent New York Times article had this perspective, "Teens say “OK boomer" is the perfect response for this generation which often feels dismissed, because it’s blasé but cutting. It’s the digital equivalent of an eye roll. And because boomers so frequently refer to younger generations as “snowflakes,” a few teenagers said, it’s particularly hilarious to watch them freak out about the phrase."  Johnathon Williams, a 20-year-old college student who wrote a song considered the "ok boomer" movement anthem added this.  "In the end, boomer is just a state of mind."  Mr. Williams said anyone can be a boomer — with the right attitude. “You don’t like change, you don’t understand new things especially related to technology, you don’t understand equality,” he said. “Being a boomer is just having that attitude, it can apply to whoever is bitter toward change.”

In a separate conversation with my soon-to-be, 21-year-old niece she was complaining about not fitting into the Millennial framework, but also not aligning with the Zoomers (Gen Z).  There's this group born between 1995-2000 that had VHS cassettes and CD's side by side, know what a payphone looks like, but probably never used one and were required to learn cursive. Like me, she too feels like she just doesn't "fit in" with the generational stereotype assigned to her.

An article by Pew Research Center on "Defining Generations" indicated that "Generations provide the opportunity to look at Americans both by their place in the life cycle – whether a young adult, a middle-aged parent or a retiree – and by their membership in a cohort of individuals who were born at a similar time."  They go on to say that generational cohorts provide tools to analyze changes in views over time.

As a marketer, this so intrigues me.  In my work I look at the generational compartments we've assigned to age groups on a daily basis.  Boomers, Millennials, Gen X, Gen Z ... pick any one and you can easily identify expected traits, habits, mannerisms and most important in my line of work, buying habits.

We so often look at audiences and what affects them, what can influence them, what can get them to change their habits or buy a product.  We research and develop detailed personas, identifying pain points, wants and needs so that we can better connect with target audiences in real and influential ways. But in most scenario's one of the primary qualifiers is always time based. When were they born? 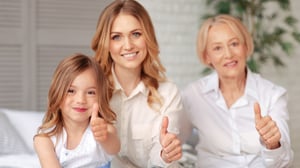 One thing that we know for certain is that the generational cutoff points are not an exact science.  There is no set number of years that applies to each category.  Pew Research again states, "At 16 years (1981 to 1996), our working definition of Millennials is equivalent in age span to their preceding generation, Generation X (born between 1965 and 1980). By this definition, both are shorter than the span of the Baby Boomers (19 years) – the only generation officially designated by the U.S. Census Bureau, based on the famous surge in post-WWII births in 1946 and a significant decline in birthrates after 1964."

Is it now time to consider that generational differences should no longer be based on spans of time but rather influencers, technology, experiential opportunities?

After all, communication and technology have forever changed the landscape of human interaction.  Just think about the changes that have occurred in the last five years.  Even in the last year.  The world's information is at our fingertips.  In the rapidly changing world in which we live, do we now need to consider that each year can produce a different generational cutoff?  Or is it time to focus less on generational cutoffs and more on attitudinal segmentation?

Attitudinal segmentation is the grouping of customers into target groups, based on shared attitudes – what individuals think and how they feel.  These types of segments are useful because although two individuals may appear to be similar in terms of age and behavior, they may hold very different attitudes.

An article in Marketing Week titled "Why behaviour beats demographics when it comes to segmentation" calls out with the wealth of customer data now available, brands are increasingly evolving their approach.  Marketing Week surveyed more than 800 marketers on their preferred segmentation method and found the three most commonly used are:

One of the closing paragraphs of the article says, "Regardless of the approach to segmentation marketers choose to take, the strategy first and foremost must be objective led. Whether looking at a specific demographic, or focusing on a behavioral insight, attitude or life stage, the key is to be clear about what you want to achieve and resist trading in stereotypes."

Maybe it's time we stop putting a name to those so-called stereotypes. Stop trying to put a framework around generations and just find better ways to connect with humans. Humans that are old and young, use technology or don't, have a passion or just try to get from one day to the next.  After all, it's the connections we make and our shared experiences with others that can have the largest impact on our lives.  Maybe it's time we just connect a little more simply.  What do you think?

Written by Leslie A. Verral